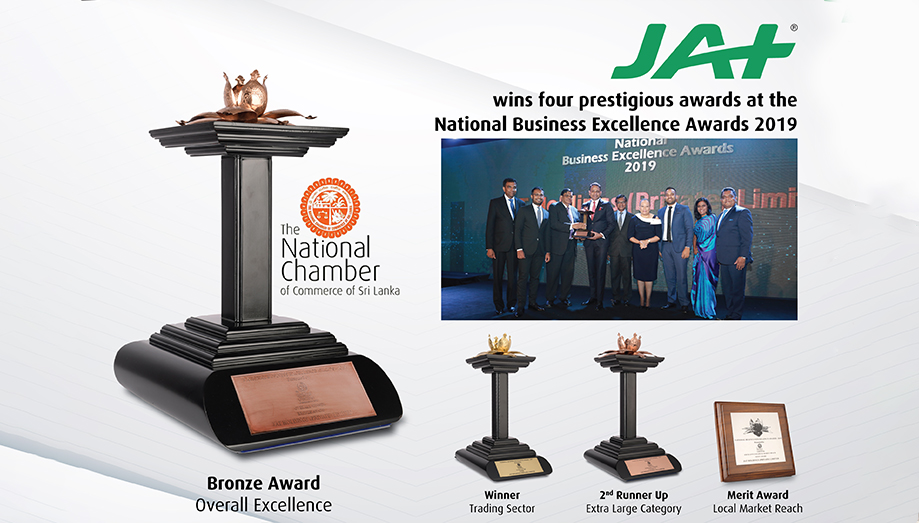 JAT Holdings, the leader of wood coatings in Sri Lanka recently bagged four astounding awards at the National Business Excellence Awards 2019. Presented by the National Chamber of Commerce, the awards ceremony was held at the Grand Ballroom – Hilton on the 13th of December, in order to recognize and reward organizations that have excelled in their business processes.

With an aim to distinguish business entities which have demonstrated excellence in business coupled with contribution to the economic progress of the country, the National Chamber of Commerce annually felicitates such business entities during the National Business Excellence Awards. The evaluation for the awards comprises of facets in the likes of Corporate Governance, Capacity Building, Performance Management, Global and Local Market Reach, Corporate Social Responsibility & Environmental Sustainability, and Business & Financial Results.

Since its inception in 1993 as the leader in wood coatings in Sri Lanka, JAT Holdings has burgeoned in business reputation, financial strength and brand recognition, placing the organization among the top strongest conglomerate brands in the island, along with the honoured title of the largest distributor for Sayerlack in the world.

One of the most sought-after brands in the South Asia for furnishing, JAT Holdings has been named among the Top 100 Most Respected Companies cited by LMD for two consecutive years. JAT Holdings has also been recognized as the undisputed leader in the Bangladesh market for wood coating as a consequent of the introduction of their high-quality products.

In addition to making a statement at the National Business Excellence Awards 2019, JAT Holdings was also honoured the National Merit Award – Extra Large Category in the Manufacturing Sector along with the CNCI Top Ten Award at the CNCI Achiever’s Awards 2019 and the Sectorial Award – Merit Certificate in the Entrepot Trade Sector at the Presidential Export Awards 2019. By inheriting various accolades of various calibres, JAT Holdings evidently proves its commitment towards elevating the playing field in Sri Lanka and taking the country to new heights.