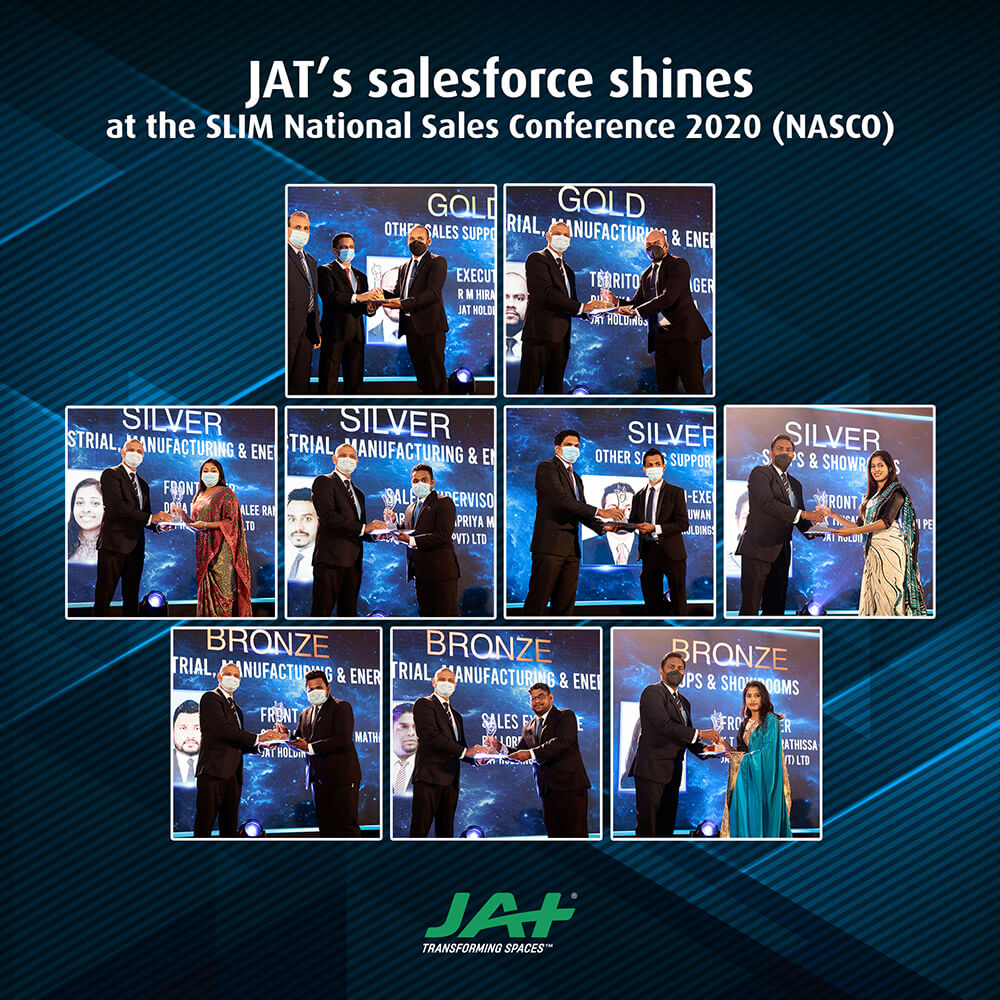 JAT Holdings PLC, multinational conglomerate and leader in wood coatings in Sri Lanka and Bangladesh bagged 9 individual awards at the recently concluded National Sales Congress (NASCO) Awards 2020, organized by the Sri Lanka Institute of Marketing (SLIM). The awards were presented to members of JAT’s exemplary sales staff who acted as true warriors in the new wave, enabling the company to record an exceptional financial performance over the year in spite of the numerous pandemic related challenges that were posed.

Celebrating its 21st year, the SLIM NASCO Awards reinforced its dedication to recognizing the efforts and performance of sales personnel, hosting the awards under the theme ‘Warriors of the New Wave’. With SLIM NASCO being Sri Lanka's only credible and respected national awards ceremony that recognizes sales professionals, being acknowledged at the ceremony is a much-coveted experience that sales professionals and corporates across the island anticipate all year around.

This year, JAT Holdings was granted the opportunity of celebrating an astounding number of honours, taking home 9 individual awards across various categories. With JAT’s salesforce playing an integral part in the company’s performance, these wins come as an accurate representation of JAT Holdings’ stability and financial strength despite adverse market conditions. The awards are a reflection of how JAT’s salesforce worked tirelessly over the pandemic, risking their lives and those of their families to achieve the company’s goals, and serving as true warriors of the new wave. Acting as the lifeblood and backbone of JAT’s operations, the individuals were recognized at the awards night as the driving force of the organization, aiding JAT to record the best financial year in the history of the company.

Speaking at the awards, Director of Sales and Technical at JAT Holdings, Wasantha Gunaratne stated, “We are immensely grateful for the recognition of our staff today by Sri Lanka’s most esteemed and only sales awards, and we’d like to extend our thanks to SLIM for creating the only platform in Sri Lanka to recognize sales professionals and uplift the local playing field by grooming them. These individuals have gone above and beyond their line of duty, playing a pivotal part in the success of JAT Holdings over the past year. Even in the face of great adversity, with the COVID-19 pandemic posing ever-evolving challenges to our sales staff, these individuals were able to transform, adapt and overcome anything in their path to truly exceed in their individual capacities. We at JAT pride ourselves on our brilliant workforce and are eager to see the great things they are yet to achieve.”

Since its founding in 1993, JAT Holdings has established itself as a market leader in Sri Lanka for wood coatings and as one of the country’s most promising conglomerates. This is further attested to by accolades such as being ranked amongst Sri Lanka’s Top 100 Most Respected Companies by LMD for 4 years consecutively and also ranking among the Top 20 Conglomerate Brands by Brand Finance. Up until its recent IPO in July 2021, JAT Holdings was the only privately held company in Sri Lanka to receive the coveted Moody’s ICRA “A+ Stable” rating for 5 years, consecutively. Having secured multiple spots at the SLIM NASCO Awards this year, JAT reinforces its position as one of Sri Lanka’s most successful multinational companies.