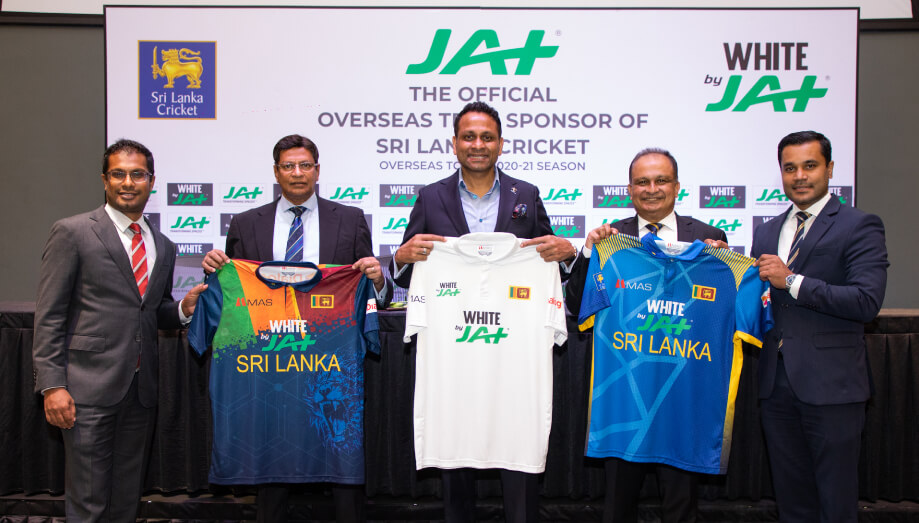 04th March 2021, Colombo: Supporting the nation’s beloved sport, JAT Holdings Limited was announced as the “Official Overseas Team Sponsor of Sri Lanka Cricket” for the 2020/2021 cricket season, until 31st May 2021. Having sponsored the Sri Lanka tour of South Africa and Sri Lanka’s Home Series against England previously this year, the completely local and home-grown brand is also empowering the ongoing Sri Lanka tour of West Indies and the upcoming Bangladesh Tour of Sri Lanka.

As the ‘’Official Overseas Team Sponsor of Sri Lanka Cricket’’, JAT has always been a patriot of the sport. This stands evident in the organization’s involvement in the LPL, Australia tour in 2017, Bangladesh BPL and many more tours. JAT Holdings is also sponsoring Sri Lanka’s ongoing tour of West Indies, which includes 3 ODI, 3 T20 and 2 Test matches prearranged to take place during March 2021, and the Bangladesh Tour of Sri Lanka, which will take place in April – May 2021.

Despite the current economic situation, where most organizations in Sri Lanka have readjusted their sights and shied away from game-changing management decisions, JAT Holdings stepped forward to help and support the most popular sport of the nation by sponsoring Sri Lanka Cricket.  With the recent launch of WHITE by JAT, a range of brilliant white interior and exterior emulsion paints, JAT Holdings evidently proves its innovation, organizational confidence, financial stability and consistency to help give back to the community.

Addressing his thoughts on the partnership, Ashley De Silva, CEO of Sri Lanka Cricket commented, “I’m happy that JAT Holdings, a local and privately owned brand, has partnered as the ‘Official Overseas Team Sponsor of Sri Lanka Cricket’ to strengthen Sri Lanka Cricket during Sri Lanka’s Tour of South Africa, Home Series against England, the ongoing Tour of West Indies and the upcoming Bangladesh Tour of Sri Lanka. Cricket is all about partnerships and I’m sure this association will grow and develop, and that JAT will take this opportunity to harness their brand to become a global giant.”

Voicing his thoughts in relation to the sponsorship, Aelian Gunawardene, Managing Director of JAT Holdings Limited commented, “We are extremely honoured, as a privately owned Sri Lankan company, to be the “Official Overseas Team Sponsor of Sri Lanka Cricket” and this has given all of us at JAT a feeling of great pride and we wish the team every success in their upcoming series. JAT Holdings constantly seeks for channels to give back to our community, and sports has always been an area of focus. This was even more evident when JAT became the only Sri Lankan company to sponsor the Kandy Tuskers cricket team at the LPL 2020.”

He further stated, “True sportsmanship is a unifying language. It is undeniable that sporting events create complete individuals and bring together nations, ethnicities and religions despite their differences.”

Speaking about this association, Bhairav Shanth, MD, ITW Consulting said, “ITW has always believed in the potential of sports in general and cricket in particular globally. This has been an exciting association for us not least because we have a long-standing relationship with the sport of cricket here and are upbeat about the possibilities Sri Lankan cricket holds. This deal is unique as the two most trusted names in the country have come together to celebrate the most popular sport in Sri Lanka. Through this association, we are committed to enabling Sri Lanka Cricket enter an exciting new era.”

JAT Holdings has continually sponsored major sporting events on home soil and abroad, from standing tall as the main sponsor of the Sri Lanka vs. Australia Test series while co-sponsoring the ODI's and several other Sri Lankan Cricket Tournaments. As a socially responsible organization which seeks to bring communities together through sports and being “Official Overseas Team Sponsor of Sri Lanka Cricket” during the 2020/2021 cricket season, until 31st May 2021 will only pave the way for more ventures similar to this.

WHITE By JAT Wins Silver at SLIM DIGIS 2.2 For Best Use of Technology in Marketing

Recording a historic moment for...

Recognizing the company’s excellence in...