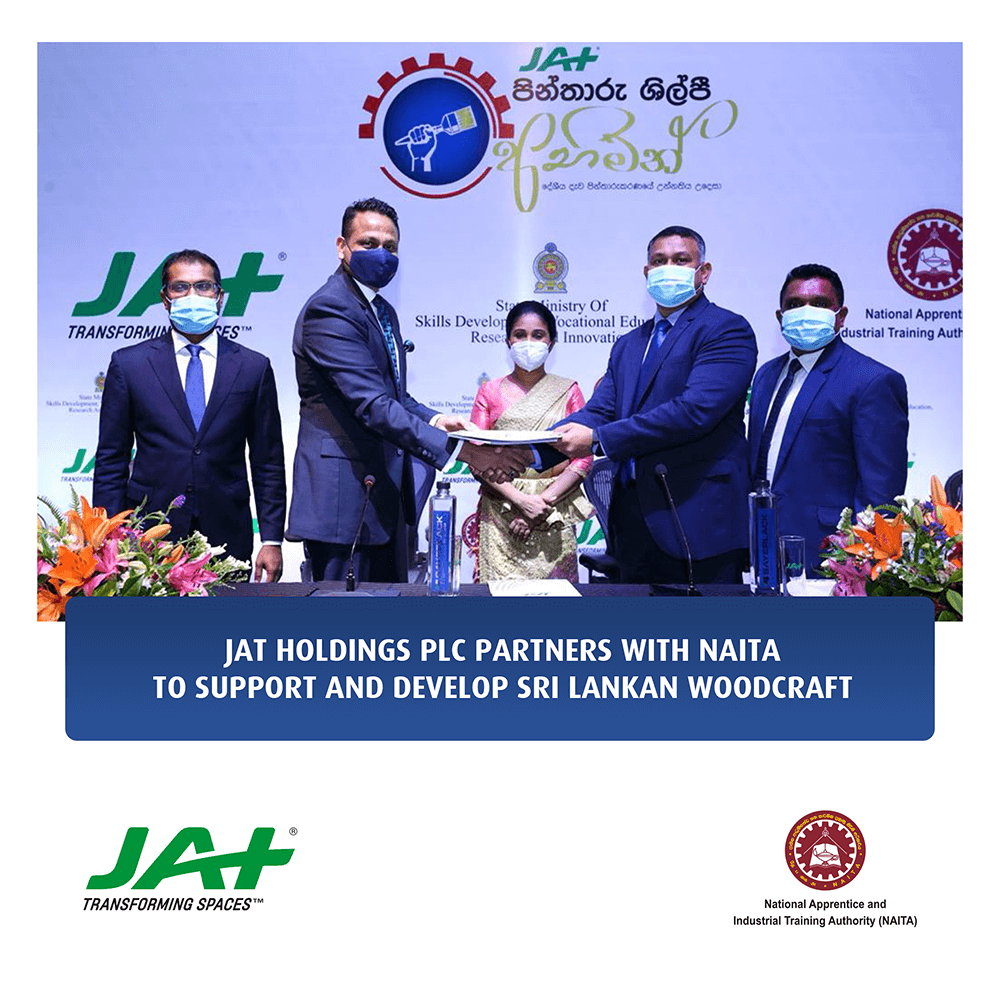 Colombo, 10th December 2021: In an effort to support wood craftsmanship in Sri Lanka, JAT Holdings PLC has launched the “JAT Pinthaaroo-Shilpee Abhiman” programme to provide training and apprenticeships to woodcraftsmen, thus encouraging a new generation to take up this important age-old craft. This initiative is an extension of the JAT Sayerlack Sathkaraya CSR programme and is being conducted in partnership with the National Apprentice Industrial Training Authority (NAITA), under the auspices of the Ministry of Skills Development, Vocational Education, Research & Innovation. Through this programme, aspiring woodcraftsmen can participate in and obtain an NVQ Level 3 Certification for Woodcraftsmen (Furniture Finisher) with all expenses borne by JAT Holdings PLC.

The partnership was officially entered into through the signing of a special MOU between JAT Holdings PLC and NAITA, at a ceremony held at the JAT Holdings Auditorium on the morning of the 10th of December 2021. A press conference was also held at the event, which was graced by top officials from JAT, NAITA and the Ministry, including the Minister for Skills Development, Vocational Education, Research & Innovation, the Hon. Dr. Seetha Arambepola, Founder and Managing Director of JAT Holdings – Mr. Aelian Gunawardene, Chairman of NAITA – Mr. Tharanga Nalin Gamlath and CEO/Executive Director of JAT Holdings, Mr. Nishal Ferdinando.

Announcing and discussing the programme, Mr. Wasantha Gunaratne – Director Sales & Technical – JAT Holdings PLC said, “At JAT, we are always keen to explore possibilities to support the nation and its growth through a skilled and competent youth and workforce. As a leader in wood coatings, we are aware of the fact that top class woodcraft is a dwindling skill. Thus, we want to work to save this skill from dying out and convince a new generation that this is a viable career and a robust source of income. Through the JAT Pinthaaroo-Shilpee Abhiman programme, we will assess and nominate uncertified but skilled woodcraftsmen who will then be able to obtain the NVQ Level 3 qualification in a shorter time than normal, as a result of our recommendation and assurance to NAITA. Ultimately, this will help uplift the quality of woodcraft in Sri Lanka, while also uplifting the craftsmen, uncovering new talent, and providing craftsmen with a qualification that is globally recognized. As a business that is close to our stakeholders, JAT’s existing loyalty members and craftsmen with whom we have long-term relationships will be given preference for entry to this programme.”

Chairman of NAITA, Mr. Tharanga Gamlath also commented on the initiative saying, “We have very talented people in this country who can go very far if equipped with the right skills and given the right training. Thus, we are pleased to partner with JAT Holdings in this matter, to encourage and support our local craftsmen.”

For more information about the programme, any interested party can call JAT Holdings PLC’s Loyalty Hotline on 011 752 4150. While JAT Loyalty Members will receive preference, the programme is open to all. More information can also be obtained via the NAITA website.

Since its founding in 1993, JAT Holdings has established itself as a market leader in Sri Lanka for wood coatings and as one of the country’s most promising conglomerates. This is further attested to by accolades such as being ranked amongst Sri Lanka’s Top 100 Most Respected Companies by LMD for 4 years consecutively and also ranking among the Top 20 Conglomerate Brands by Brand Finance. Up until its recent IPO earlier this year, JAT Holdings was also the only privately held company in Sri Lanka to receive Moody’s coveted ICRA “A+ Stable” rating for 5 years, consecutively.