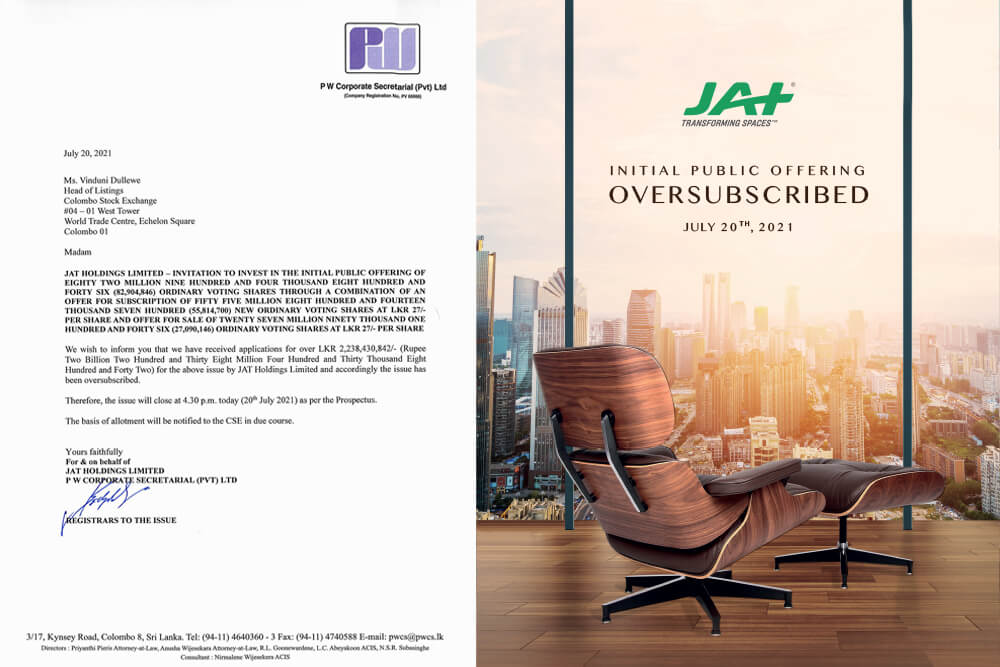 21st July 2021, Colombo: Following the widely sought IPO by JAT Holdings yesterday (20), the company experienced massive interest and market demand, resulting in the oversubscription of 82,904,846 ordinary shares. Priced at a value of Rs. 27 per share, the IPO raised Rs.2.2 billion in funds for the company’s near term objectives of investment in enhancing the existing R&D facility to a fully-fledged, state-of-the-art facility for all coatings, setting up a manufacturing facility in Bangladesh, expanding the WHITE by JAT marketing and development initiatives and setting up a manufacturing facility in East Africa; while simultaneously providing an overall of 16% stake in the company to the public through the IPO.

With a firm market presence in Sri Lanka and Bangladesh, the company intends on paving its path towards becoming a regional leader in furnishing and finishing industries by honing in on the firm’s growth mindset, resilience, leadership and true potential to innovate; further improving and elevating its current offerings.

Commenting on the oversubscription, Mr. Nishal Ferdinando – Chief Executive Officer of JAT Holdings stated, “In record time, the shares issued by the IPO were fully subscribed and we couldn’t be more pleased to acknowledge the trust placed in the JAT brand. The oversubscription affirms that the market interest exceeds the shares offered during the IPO, further proving our organizational and financial stability”. He further commented, “Even with challenges faced by the COVID-19 pandemic, JAT will continue to make decisions to further expand the business and enhance its strengths to withstand dynamic market trends displayed.”

Since its inception in 1993, JAT Holdings has established itself as a leader in the furnishing and finishing industry, and stands as the world’s largest distributor of Sayerlack. With an international presence across key markets in South Asia and Africa, the company aims to reach newer heights, thus bestowing a plethora of benefits to all its stakeholders.

JAT Holdings has partnered with...

JAT Holdings partners with NCPC to implement the Eco-Innovation Project

JAT to add shine to CSE via milestone IPO