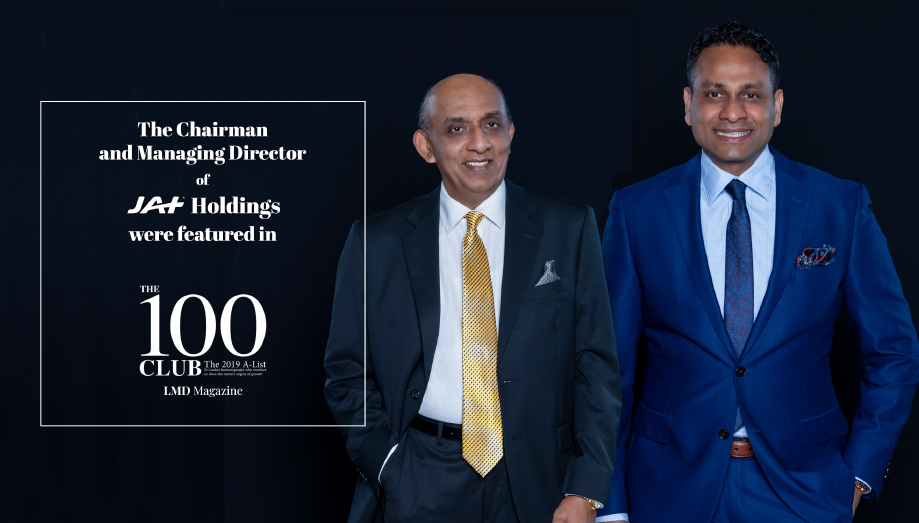 Dr Sivakumar Selliah, Chairman and Mr. Aelian Gunawardene, Managing Director of JAT Holdings were recognised as two of the ‘100 Sri Lankan businesspeople’ who continue to drive the nation’s engine of growth, by LMD’s 100 Club: the 2019 A-List.

Named as the ‘Unconventional Investor’ in the 2019 A-List, Dr Sivakumar Selliah holds over two decades of experience in diverse sectors from manufacturing, logistics to retail and insurance.  His visionary leadership and passion for success has enabled JAT to perform exceptionally and to achieve sustainability and solidarity.

Renowned as the ‘Coatings Celeb’ in the 2019 A- List, Mr. Aelian Gunawardene has been the brainchild and driving force behind the success and transformation of JAT.  His leadership has been instrumental in growing the business into the fledging conglomerate JAT is today, with interests in several key sectors including a strong regional presence in South Asia. Mr. Gunawardene was also conferred the Platinum Award for the 22nd Sri Lankan entrepreneur of the year 2017 by the Federation of Chambers of Commerce and Industry of Sri Lanka (FCCISL).

It is a great honour and pride for the employees of JAT Holdings to be led by two successful and visionary leaders, who have made and continue to make a significant contribution to the country’s economy.

Dubbed ‘The 100 Club,’ LMD’s A-List of Sri Lankan businesspeople is based on nominations received from LMD’s contributors, as well as an in-house think tank led by the editorial and senior management teams.