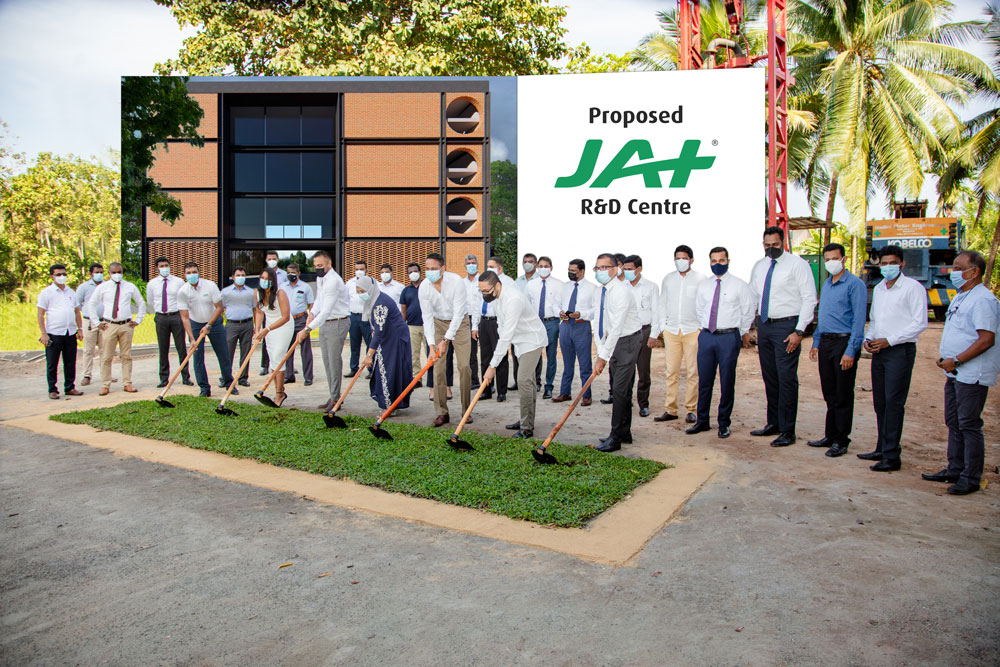 JAT Holdings, Sri Lanka’s trusted industry leader in finishing and furnishing, re-confirmed the firm’s commitment to its Initial Public Offering (IPO) investment priorities with the commencement of the construction of its state-of-the-art R&D centre adjoining its Head Office premises, located in Thalawathugoda. A groundbreaking ceremony was held on the 19th of January 2022.

As per the Investment priorities set out during the IPO on 20, July 2021, proceeds from the IPO have been utilised for the company’s near term objectives of investment to create the R&D Centre - making it not only one of Sri Lanka’s cutting-edge facilities, but also one of the best research centres in South Asia for coatings. Expected completion of the facility within 7-9 months, featuring modern design by Architect - Chamika De Alwis, creating a conducive environment for innovation, housing 20+ R&D specialists including foreign experts; and advanced equipment and instruments such as FTIR, HPLC, GCMS Pyrolizer, UV-VISS Spectrophotometers for Reverse Engineering, Ready Lab reactors for Radleys, Particle size Analyzers, Minimum Film Forming Temperature instruments for Polymer synthesis & evaluation of polymers. The facility will also contain accelerated weather meters to measure the accelerated weathering resistance of paint and coatings, Humidity Chambers to measure the behaviour of the coating in varying humidity conditions, a Salt Spray machine to conduct coating testing against sea breeze environments, as well as all types of rheometers for Rheological properties when in the can, as well as during the application process, concrete water impermeability apparatus, Elongation testers for waterproofing and high-end Colour Spectrometers for colour accuracy and colour consistency.

Furthermore, the prevalence of its R&D centre will enable JAT Holdings to maintain GPs through innovations in wood coatings, decorative and performance coatings, enhancing the performance of existing products, as well as assisting backward vertical integration. In addition, the R&D Centre is expected to support JAT Holdings to further expand its presence in Bangladesh, India and African markets with the vision of becoming an internationally acclaimed leader in wood coatings. The commitment to ensuring the completion of these initiatives further prove JAT’s commitment to elevate Sri Lanka to global heights.

Commenting on the successful ground-breaking Founder & Managing Director, JAT Holdings - Aelian Gunawardene - stated, “We are incredibly pleased to announce the ground-breaking of our state-of-the-art R&D Centre. We are deeply committed to our investors and the strategic investment they have made with JAT Holdings. The enhancement of our R&D prowess is just the first step in our investment promises at the launch of our IPO, and we continue to uphold our end of this strategic investment to ensure all our stakeholders are able to reap a plethora of benefits on par with the growth of the company.”

Since its founding in 1993, JAT Holdings has established itself as a market leader in Sri Lanka for wood coatings and as one of the country’s most promising conglomerates. This is further attested to by accolades such as being ranked amongst Sri Lanka’s Top 100 Most Respected Companies by LMD for 4 years consecutively and also ranking among the Top 20 Conglomerate Brands by Brand Finance. Up until its recent IPO in 2021, JAT Holdings was also the only privately held company in Sri Lanka to receive Moody’s coveted ICRA “A+ Stable” rating for 5 years, consecutively.