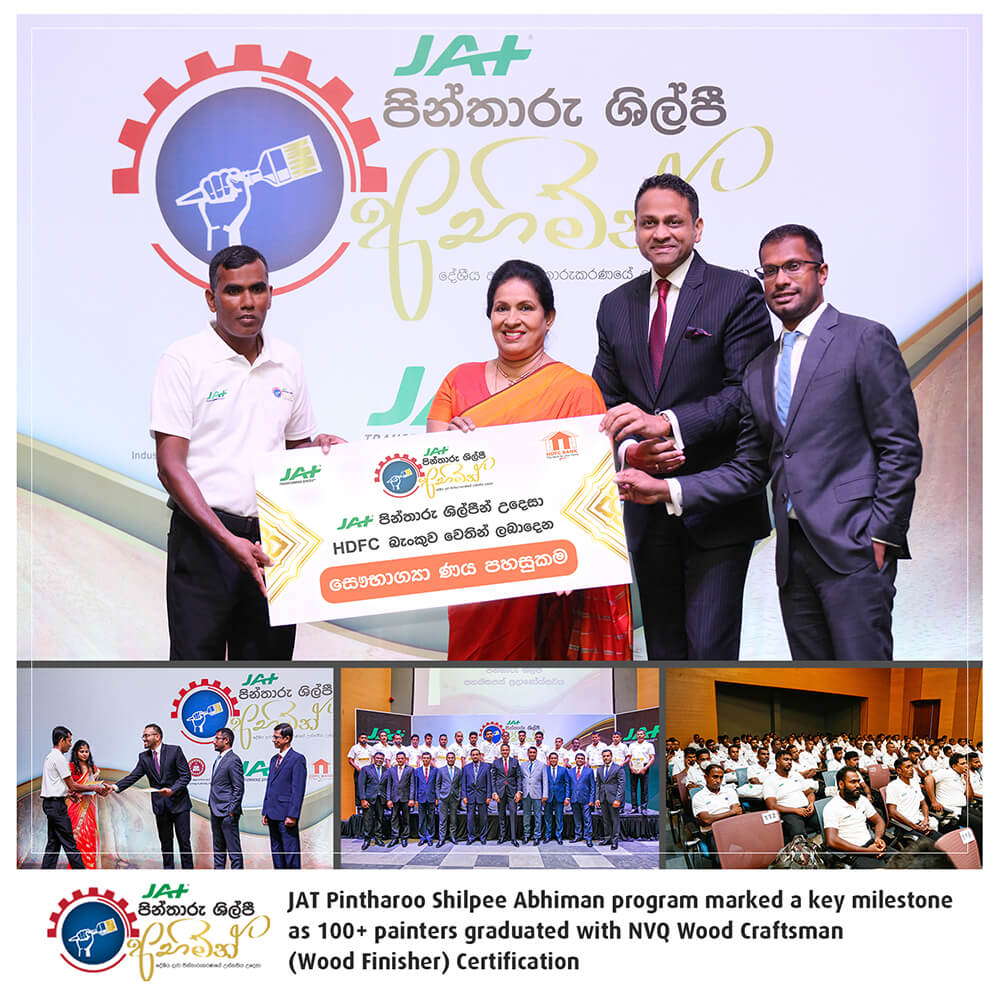 JAT Pintharoo Shilpee Abhiman is a pioneering programme that was launched by JAT Holdings PLC, Sri Lanka’s market leader in wood coatings, in partnership with the National Apprentice Industrial Training Authority (NAITA), to uplift the industry and to help promising painters and carpenters build their lives and hone their craft, by providing these skilled but uncertified individuals with a formal certification in their field of work. Under this programme, NAITA has provided 100+ painters/woodcraftsmen, identified by JAT Holdings, with an NVQ Level 3 Wood Craftsman (Wood Finisher) Certification, upon the successful completion of an examination conducted by NAITA. This is the first such collaboration of this nature to offer certification for highly-skilled individuals, and is a milestone, not just for JAT Holdings, but for the industry as a whole.

These painters/woodcraftsmen, made up of 7 batches that successfully completed the programme, were formally presented with their certifications at the JAT Pintharoo Shilpee Abhiman Convocation Ceremony, held on the 6th of October 2022, at the JAT Holdings Auditorium. Individuals who obtained the NVQ Level 3 Certification, and who are also members of the JAT Loyalty Programme, are eligible to apply for a loan from HDFC bank to further their business interests. One such eligible painter/woodcraftsmen obtained the first such loan under this programme, which was ceremonially disbursed to him at the Convocation. Present at the JAT Pintharoo Shilpee Abhiman Convocation Ceremony were the Vice Chairman and other representatives of NAITA, the Chairman of HDFC Bank, along with key representatives from the bank and senior members of JAT Holdings’ Corporate Management Team, including Founder/Managing Director of JAT Holdings PLC, Aelian Gunawardene and Chief Executive Officer (CEO), Nishal Ferdinando.

Commenting on the success of the initiative, Nishal Ferdinando, Chief Executive Officer (CEO) at JAT Holdings said, “Our market leader position has been achieved by our passion for excellence. One way we have consistently achieved excellence is by constantly uplifting the industry by creating opportunities for skilled individuals, recognizing them, rewarding them and cheering them on as they hone their skills and deliver increasingly exceptional quality. To achieve this, we have launched a comprehensive loyalty programme in the form of JAT Pintharoo Shilpee Abhiman, and this partnership with NAITA and HDFC builds on the work we have already been doing. Therefore, it gives us great pride to congratulate the new graduates and we look forward to seeing even higher quality work from them in the future, as they build their skills and create value.”

JAT Pintharoo Shiplee Abhiman is a three-phase, long-term initiative by JAT Holdings to help formalize the industry, increase professionalism, and identify and promote talent and skill, while supporting innovation and growth. Phase One included the “JAT Loyalty” programme, the first-ever loyalty programme in the industry to offer loyalty points that can be directly converted to cash or used to fund savings, through a collaboration with Commercial Bank of Ceylon PLC, and the exclusive JAT Commercial Bank Debit Card.

Building on Phase One, Phase Two included the partnership with NAITA to provide NVQ Level 3 Certification through a fast-tracked programme, the first graduates of which were recognized at the JAT Pintharoo Shilpee Abhiman Convocation Ceremony. This initiative allows skilled individuals, identified by JAT Holdings, to complete the NVQ Level 3 Certification by directly sitting for the Assessment, based on the previous track record of their competencies, which have been identified by JAT through the training programme and the initial assessment conducted. Ordinarily, this Certification would take months to complete, time which many of these highly-skilled individuals do not have, as they would rather use their skills to create value and generate income to support their families. However, formal certification can go a long way in opening up opportunities for career development, higher education and further skills development. Thus, JAT Holdings has, in partnership with NAITA empowered these individuals to obtain formal certification recognizing their exceptional skills.

In Phase Three of the JAT Pintharoo Shilpee Abhiman Programme, JAT is partnering with companies that can further add value to and elevate the lives of painters. One such partnership is that with HDFC Bank, to support and enhance the lives of painters, by providing them with access to finance to become qualified individuals in the industry and grow their potential. This financing goes towards assisting painters to purchase equipment and for working capital requirements. A special mechanism for credit delivery and recovery have also been designed and implemented through this partnership, to further empower painters and woodcraftsmen.

Through its CSR and Sustainability initiatives, particularly JAT Pintharoo Shilpee Abhiman, the Group is creating both direct and indirect positive impacts on sustainability and its core business, through the promotion of water-based wood-coating solutions and innovations to reduce reliance on solvents. The programmes also impact core areas such as livelihood development and education, helping to transform Communities and the Mind. JAT Pintharoo Shilpee Abhiman is also aligned with the UN Sustainable Development Goals (SDGs), particularly the goals of No Poverty, Quality Education, Decent Work and Economic Growth and Industry, Innovation and Infrastructure.

About JAT Holdings PLC
Since its founding in 1993, JAT Holdings has established itself as a market leader in Sri Lanka for wood coatings and as one of the country’s most promising conglomerates. This is further attested to by accolades such as being ranked amongst Sri Lanka’s ‘Top 100 Most Respected Companies’ by LMD for four years consecutively and also ranking among the ‘Top 20 Conglomerate Brands’ by Brand Finance. Up until last year's IPO, JAT Holdings was also the only privately held company in Sri Lanka to receive the coveted Moody’s ICRA ‘A+ Stable’ rating for 6 years consecutively.